Your QZAB-eligible LEAs (school districts with 35% or more students on Free/Reduced cost meals) CAN replicate the success of Steubenville City Schools, Ohio, a 100% Free/Reduced cost meals District, See the press article below. Thus. they can fully comply with the Academy provision of the QZAB law—“preparing students better for college and workforce.” Please emphasize this in your QZAB application and approvals. Feel free to ask your QZAB-eligible school districts to contact us for assistance with any aspect of QZAB, especially the 10% Match and the Academy. Our teams at NEF (National Education Foundation) and SUNY (State University of New York) stand ready to assist your school districts to  advance a student in 20-30 learning hours! Have a great happy day! …

STEUBENVILLE – The Steubenville City School District was awarded a $10,000 check and the National S.T.E.M. Leadership Award Tuesday during a ceremony at Steubenville High School. 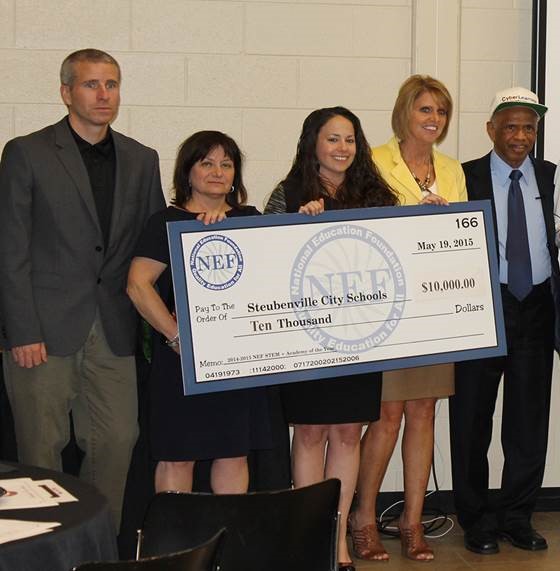 D”Aurora was hired as the first S.T.E.M. Academy director in April 2014 and said Tuesday, “it was full speed ahead.”

“Earlier this year we partnered with the Charles M. and Thelma M. Pugliese Charitable Foundation for a $230,000 grant that will help offset the cost of students taking classes at Eastern Gateway Community College or Franciscan University of Steubenville while they are still in high school,” D”Aurora said.

“And starting with our freshman class next year we will offer college courses to our high school students in addition to their high school courses so they can graduate with a high school diploma and two years of college credits,” continued D”Aurora.

“We are also offering a career pathways program to help our students consider different career possibilities. And starting next year we will have a roof garden program to offer students a chance to look at a career in agriculture. I am very excited that we can serve as the model for the S.T.E.M. program in Ohio,” said D”Aurora.

She cited several accomplishments in the first year of the S.T.E.M. Academy, including hosting a Cool Careers in Cyber Security Workshop with representatives from the U.S. Department of Defense.

“We also offer more than 2,500 courses to students, staff, parents and community members in business, IT and desktop Publishing. And next year we plan to implement an advanced career pathway in Innovations in Science and Technology and robotics in grades kindergarten through fourth through LEGO education,” continued D”Aurora.

“The NEF”s S.T.E.M. Solution has been implemented in school districts across the nation by State University of New York in partnership with local universities. Steubenville”s success stands out as a clear example of how to effectively improve student achievement by motivating all the stakeholders-students, teachers, parents and administrators,” Kuttan said.
(Gossett can be contacted at dgossett@heraldstaronline.com.)
© Copyright 2015 Herald-Star. All rights reserved. This material may not be published, broadcast, rewritten or redistributed.
– See more at: http://www.heraldstaronline.com/page/content.detail/id/624217/Steubenville-schools–awarded-national–S-T-E-M–award.html?nav=5010#sthash.98vY5gVU.dpuf