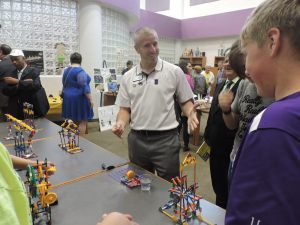 Eric Robb, a freshman at Martins Ferry High School, poses with some of the school’s projects. The Martins Ferry City School District was named the National Education Foundation’s S.T.E.M. academy of the year. — Robert DeFrank

MARTINS FERRY — Martins Ferry City School District is the National Education Foundation’s Science Technology Engineering and Math Academy of the Year — a distinction that was rewarded with a check for $10,000 during a ceremony on Friday.

“We will be investing the monies that we were awarded with for advancement in technologies,” Superintendent Jim Fogle said. “We will also be purchasing more Chromebooks, more carts, more technology programs for our students. This enables us to give the tools to our students so they have what is necessary to succeed in a S.T.E.M. world.”

He added he was proud of the students, staff and administrators.

“Today was a celebration — a celebration of the success of our students, our staff, our building administrators, all the hard work they’ve done this year. Our students showed the most growth out of all the National Education Foundation S.T.E.M. Academies in the nation,” Fogle said. “We’re very proud of them. We’re honored.”

Fogle credited the hard work and dedication of all involved for making the district’s success possible. He praised the teachers who set and met goals and the administrators who implemented the plans, as well as the students’ efforts.

Fogle added that while the district is proud of its great sports tradition and reputation, the district’s primary goal always will be education of the students.

“We are competing worldwide with other countries for jobs,” Fogle said. “We used to compete for jobs in a 30-mile radius. Now we’re competing all over the world.”

Kuttan said he was impressed by the inventiveness and motivation of the students.

“I think these kids are really excited, and I think, given the opportunity, these kids can compete with anybody in the world,” he said, having observed their projects and progress. “Now they can do almost anything. They can run robotics. They can design them.”

For added motivation, he pointed out next year’s prize will be $50,000.

“These kids are going to work very hard, because motivation is the key for these kids. How do you motivate them to come to class every day and find learning to be fun so that they can reach any level they want?”

Kuttan stressed the importance of learning the elements of S.T.E.M. and of hands-on application of those lessons through project-based learning.

Anthony K. Betrus, national director of NEF, said he was impressed by the progress made in the Purple City.

“Two years ago I came down for their kickoff academy. I stopped at your local toy store and I picked up a Sphero Spark, which is a small little round robot, and I demonstrated it in front of the auditorium to ‘spark’ their interest in robotics, S.T.E.M. tools and building, and now I come back two years later and they’ve got multiple Sparks in the room. They’ve got Sphero Olli. They’ve got Fischer Technic, and the kids are building fantastic (projects),” Betrus said.

The event concluded with a physical challenge contest with a prize of $1,000. Kuttan won and donated the money for a pizza party for the school.